What is an "open" batting stance in baseball? 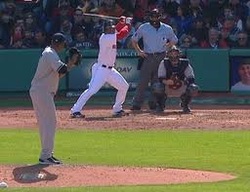 When a hitter steps into the batter's box and the back foot is closer to home plate than the front foot, it is considered an open batting stance in baseball. The baseball world is starting to see the open stance more at every level. If you watch a lot of baseball, you've probably noticed the change in the traditional batting stance. The square or slightly closed stance was used by most in the early to mid 1990s. Now the open stance has become the stance of choice from youth league to the major league baseball level. Some hitters claim to see the ball better from an open stance. They say it makes it easier to turn the head to the pitcher and see with both eyes.  The only problem with the open stance is in the step. A hitter must make an adjustment to step towards the pitcher. For example, if a right-handed batter with an open stance steps in the line of the feet, the step will be towards the short stop or third baseman. This is called "stepping in the bucket". Some high school (not all), college or pro hitters can use the open batting stance because they understand how to step from open to square (stepping straight towards the pitcher) without upsetting their timing. However, most youth batters (and coaches) don't have the same understanding.

What is a "closed" batting stance in baseball?

The next stance we will discuss is the closed batting stance in baseball. When a batter's front foot is closer to home plate than the back foot, it is called a closed stance. Some coaches will instruct hitters to close the stance to stop them from "stepping out" during the swing. Now a whole new set of problems can start by stepping closed. If the hitter doesn't know to step square to the pitcher, then the step will be across the body. This is a great example of fixing one problem and creating another. However, if it works for the hitter, that's fine. The name of the game is to help hitters become successful at the plate, right? But remember, closing the stance to stop a hitter from "stepping out" might not work for every hitter. No, it will not work for every hitter.

What is a "square" batting stance in baseball?

Which batting stance is best?

Coaches should keep things simple and easy to understand for players. We prefer the square batting stance for youth hitters. We believe the square batting stance is the most fundamental stance to teach youth hitters. A key advantage of using the square stance is  the step. There is no adjustment to make. A hitter can step straight ahead without thinking about finishing open or closed. Not having to think about going from open to square, or closed to square gives a youth hitter one less thing to think about.

The open batting stance can promote stepping "in the bucket" for youth hitters who don't understand the importance of stepping square. When they step straight ahead in the open stance, the step is really towards the short stop or third baseman for a right-handed batter. Ever wonder why so many coaches yell to the batter that they are "pulling" their head out? If a right-handed hitter steps towards the short stop or third baseman, what do you think is going to happen to the front-side? Right, it is going to start early causing the head to "pull" out.

Shop With Our Affiliates:   Amazon.com  |  Ebay.com  |  Groupon.com
JEC Baseball Info receives a small commission from any product that you purchase from our affiliates, when you click through the links provided on this site. I like using this model because it doesn't add any extra costs or fees to your purchases. The commission helps to offset the time and cost of maintaining and supporting the site. Thanks for visiting this page.
Home  |  Hitting Fundamentals  |  Hitting Drills  |  Batting Tips  |  Affiliates  |  Cool Baseball Stuff  |  About
By using this website, you agree to the Privacy Policy, and Disclosure.
Click here to read how to Support This Site at no additional cost to you!

How to Hit the Baseball